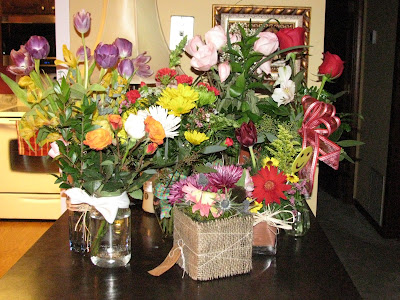 First of all, Janet wanted to say thank you so much for the prayers and support. The above picture is of all of the flowers that she has received!!! So pretty! (And Hudson scored a balloon too, ha!)

After a very long day of waiting, Janet finally received a phone call from the Oncologist late this afternoon and as of 9:30 tomorrow she is actually going to be starting Chemotherapy. She found out that it is for sure Ovarian cancer that is now in the abdomen. From the beginning we have been praying that God move quickly, and He has moved quicker than we could have ever expected. We are meeting with the Oncologist at 9:30 and then she is meeting with the surgeon to have a port placed and then the actual Chemo will begin tomorrow. She will have three rounds of Chemo and then  have the surgery, we aren't sure how long the three rounds will take but the surgery will come after that at a later date. The doctor told her today that if she was to have the surgery before the chemo she would probably be in the hospital for 10 days and they probably wouldn't be able to get it all. So with her having the Chemo first she will probably only have to be in the hospital for 4 days and there is a much higher success rate. Praise Jesus for doctors who know their stuff!

We will probably know more details after the appointments tomorrow.

She is so excited for the battle to begin because God is on her side. She is very excited that God is moving quickly.

Please be praying for our family tomorrow as we meet with the Oncologist, and I will post an update tomorrow night.
Email Post
Labels: Janet