10 Ways to Help Someone Who is Grieving.

We watched part two of the Rick Warren Series "How to Get Through What You're Going Through" last night. He talked about shock and one of the points he made was how to help people who are in shock. It made me realize that people don't typically know how to help someone who is going through extreme loss until they've been through it themselves. I thought I would share what was helpful to me and our family through this period of grief in our lives. 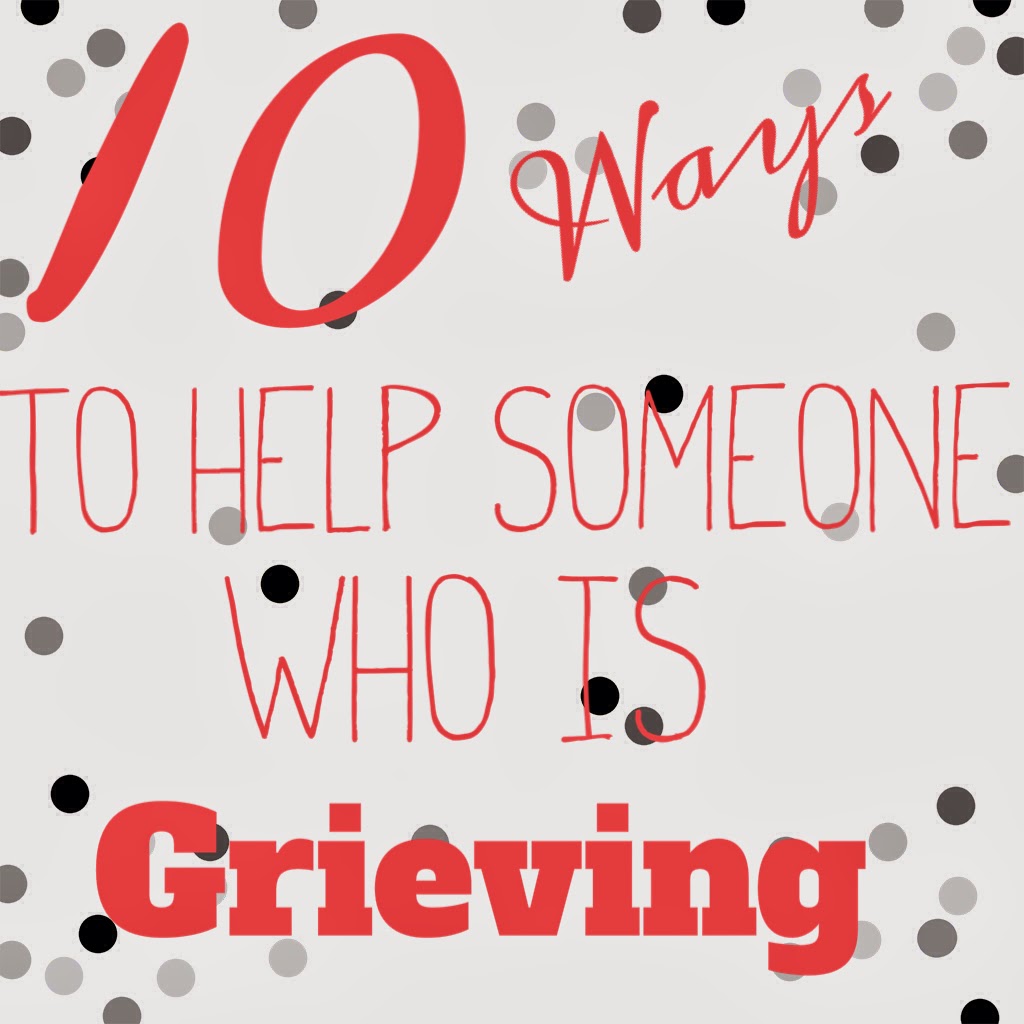 1. Do not say "Call me if you need anything". I never called one person who told me that. It puts the pressure on my end, and honestly I didn't have the time or energy to call someone and say "I need dinner tonight", it was easier to order pizza.

2. Do say "I'm bringing you dinner. Which night is better, Monday or Tuesday?" That takes pressure off and though it might seem pushy, it isn't. It made me not feel bad to say "Oh, Tuesday would be so great."

3. Go to the store. Bring essentials like toilet paper, paper towels, coffee (kcups), trash bags, paper plates and silverware. Maybe even get soda and frozen pizzas. Chances are that the grieving people are hosting more grieving people. This makes life easier. Don't ask them if they want you to do this, just do it.

4. If you have a good idea to share with the family, share it and then make it happen. A dear friend of ours gave us the idea to have Janet record books for the kids. In the last few weeks that Janet was home, we spent every waking hour over at their house. And while this was a great idea, at the time it wasn't highest on my priority list. Our friend made it happen. She went to the store, bought the books and dropped them off at the house without anyone asking. THAT was helpful and those books are priceless to me.

5. Be there. It was interesting to me to see which of our friends stepped in and which ones stepped out in this time. It is a hard time for a friend because you don't know what to do or say. I had someone in my life step in big time that before this was just an acquaintance. She brought several meals, brought a book for me about grief, helped us financially with a situation that wasn't necessary but it was a blessing. But the most precious thing she did for me was come over and sit and talk with me in the weeks before Janet died. She let me cry. She texted and called me to check on me, she hugged me when she saw me and she just covered me in love. More than anyone that wasn't family, this person made a huge difference to me. Looking back now, it kind of seems that her coming into my life was completely random but I know God placed her there for a reason and that wasn't to help anyone else in this process but to help ME. She singled me out, knew I was hurting and was there for me. If the Lord is calling you to be that person to someone, listen, it formed a very special friendship with someone I probably wouldn't have known more than an acquaintance otherwise. And to that person, you know who you are, YOU made a difference in my life, you were intentional with me. Thank you, that means more to me than you'll ever know.

6. Show up. This is similar to being there, but this is more about showing up and not having to do or say anything. It is the thought. We had several friends come to Janet's funeral for us. They didn't know Janet well or personally, but they showed up for us. I could cry right now just thinking about it. That is a picture of love that I didn't understand before this. Seeing their faces, hugging their necks and feeling so loved that our friends care enough about us to be there is one of the most priceless things there is. Several of them drove from out of town to be there. Speaking for Bryan and myself, thank you to our friends who did this. And to those of you reading and not knowing how to help someone who is grieving, sometimes you just need to show up. There are no words or actions, but just being there is the most important thing you can do.

7. Send a pizza. Send a giftcard. Send a care package. These were simple things but so helpful. The day we found out Janet's cancer was terminal (a very hard hard day for us) a very dear friend of mine texted me and told me that a pizza would be arriving at our house at 5 pm already paid for. Such a simple thing to do, but it spoke volumes. Now, obviously, I could have ordered my own pizza, but that isn't the point, when in shock and grief, not having to think about things like that are huge. We also had friends bring over gift cards for drive thru stuff, these are things that I am using still now.

8. Offer to babysit or help with the kids, and mean it. We are so lucky to be surrounded by family. My parents helped us tremendously with the boys while Janet was in the hospital and in hospice. They were amazing, but there were a few times they couldn't help and we were so grateful to have backup. I had to call our friend to come over early in the morning one day so Bryan and I could go to the hospice home and she came right over with bags packed to stay as long as we needed her. That was so helpful.

9. Call, Text, Email or Send a Card. Just to say you're thinking about them and praying for them. While I knew so many were praying, it was special to get those notes from people.

10. Pray. I know we wouldn't be doing as well as we are without being covered in prayer. We are so grateful for the prayers that have been sent our way and the Lord is hearing them.

Chances are you either know someone who is grieving, you are grieving or you're about to be one of the two... I hope this gives you some examples of things you can do to help those who are in the hardest time of their lives. And to those who supported us, thank you, you made a difference!
Email Post
Labels: Janet what I'm learning