The Day I Almost Killed Mater...

Mater is our red Beta Fish that Hudson got as a prize when he was completely potty trained. We have had him 10 months or so, which is way longer than I thought he would last... and that leads me to the story about the time I almost killed Mater. 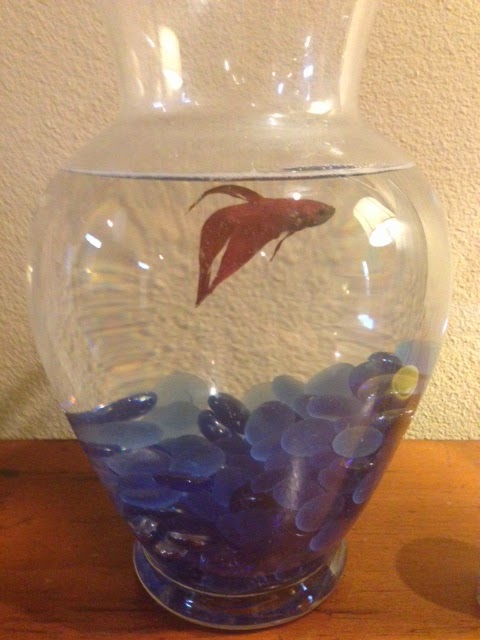 As he was walking out the door this morning, Bryan casually mentioned that I might want to change out Mater's water. It was looking kind of yucky.

So after getting the boys settled and fed, I took Mater's vase to the kitchen and grabbed a big cup to start the bowl cleaning process. I, logically, set the vase and the cup in the sink so I wouldn't pour water all over the counter. I was also happy as I started to pour Mater into the cup that he was close to the top. Last time he hung out at the bottom and it was almost impossible to get him out.

As soon as I tipped the vase the water went straight into the cup...

Mater went straight down the drain and in to the garbage disposal.

"Uh...." I stood there for a minute, surveying the situation.

In my mind there were two options:
1. Leave him there. I honestly had no desire to put my hand into the dark and yucky garbage disposal to fish out our floppy and slippery beta fish... But along with that came the thought of slaughtered fish guts once I turned on the garbage disposal and having to explain to Hudson what had happened to his fish. And then probably a trip to the store to buy another beta fish which means more wasted money, and y'all know how much I like to save money.
2. Get him out. Logically with the kitchen tongs, so I wouldn't have to touch him.

So I fetched the kitchen tongs, took off the drain cover and saw Mater just lying there alongside a lemon peel and a piece of hot dog. Lovely.

After several tries with the tongs and several flops amongst our yucky disposed-of food, Mater was happily swimming in the cup again. I breathed a sigh of relief. I finished cleaning out the vase and put Mater back in his happy home. 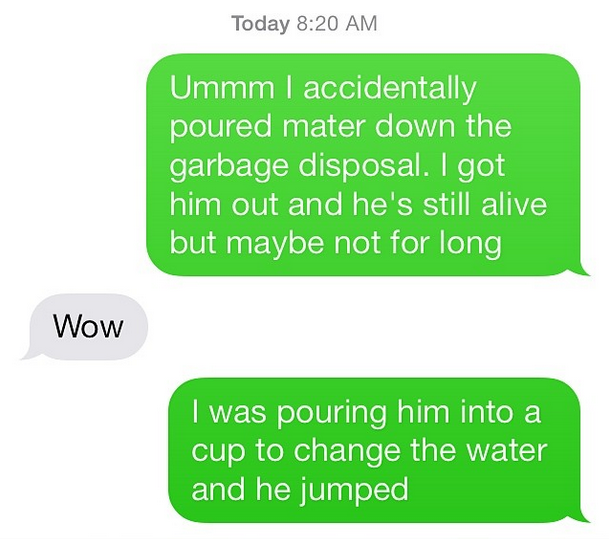 Bryan was obviously thrilled about my escapades, and honestly probably not surprised, I am a bit accident prone.

Mater is still happily swimming in his clean vase as I type. It's been a few hours so I am hoping he is going to survive this adventure unscathed.

Next time, I'll make sure and put the stopper in the drain before cleaning out Mater's vase.