Now before I get started with all the details... the number one question that I get is if this was a "bahamas" baby. And the answer is NO. And this picture is proof. I was actually 4-5 weeks pregnant when we went on our trip. We found out about a week before we left (on fathers day actually)... and were originally going to go to Cancun but had to change our trip last minute when we found out we were pregnant because of Zika. It was a whirlwind week, that involved immediate blood work to confirm, which is why I say that I feel like I've already been pregnant forever. And don't get me started on going to an all inclusive resort in your first trimester, poor timing. ;) 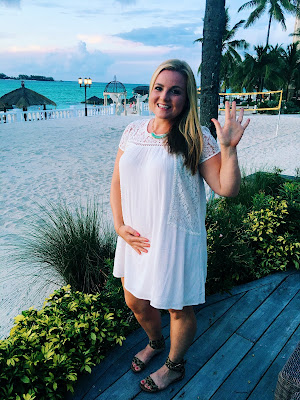 And when we got home we got to have an ultrasound, it ended up being a few days too early to see the heartbeat, but we saw him forming right away. We called and told our family as soon as we found out, and a few close friends. So those lucky people have been holding this secret with us for the last 12 weeks! 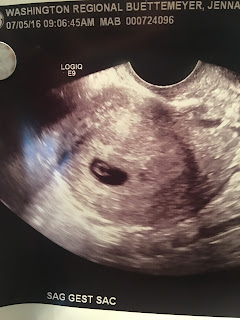 Something about baby #3 and looking immediately pregnant. At 8 weeks I looked down and was like ok whoa baby! We went back for another Ultrasound at 7 weeks and got to see our baby's heart beating away at 126. I cried. This pregnancy has been a lot more emotional for me after our early miscarriage in March but thankfully my doctor is amazing and has done more than enough to make sure all is well this whole time. 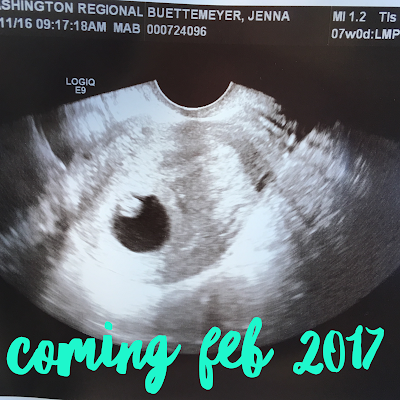 And at 10.5 weeks when I went for my first official appointment with my doctor we saw this little bean moving around and with a heartbeat of 176. 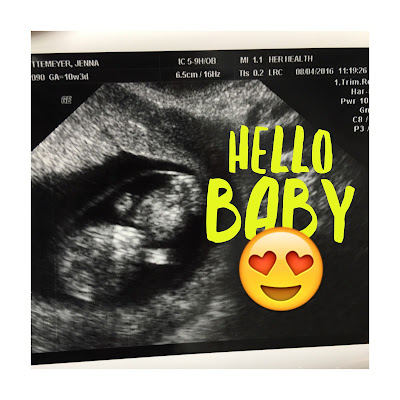 We waited to tell the boys until this point. We told them the night after this US and I framed little pictures for them that they have in their rooms. I have it on video that I will post later, but Hudson was/is SO excited and Rhett was just excited about getting m'n'ms.

This picture was last week at 11 weeks before Hudson's meet the teacher. The first day my jeans didn't fit anymore (thank you belly band and hair ties). AND also the outfit I was wearing when my best friend told me I can't keep this a secret for much longer. Ha, thanks Katy! 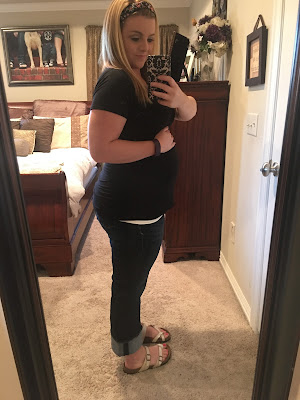 I had blood work done at 10.5 weeks that checked the baby's chromosomes. The results were supposed to be back in 5-7 or 7-10 days and it was the longest wait of my life. We finally got the phone call yesterday that the baby is completely healthy and... a boy. 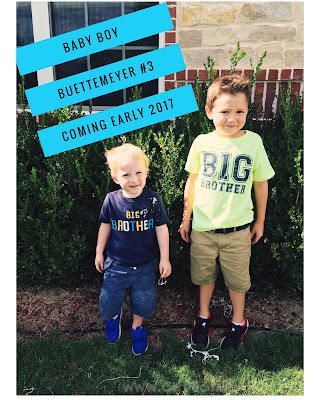 I was SO surprised because I have felt SO much different this pregnancy that I had convinced myself that it was a girl. Bryan and the boys thought it was a girl too, and actually the boys wouldn't even entertain the idea that it was another brother and they both wanted a sister SO badly. I knew it would take me a minute to grasp it being a boy, which is one reason we wanted to find out so early, but hearing that he was healthy first was enough to make my heart so happy. We immediately called our family and waited to tell the boys last night. They sprayed blue silly string to find out and it didn't turn out exactly as planned, what ever does? But they're both excited to add another boy to our clan. Bryan and I are thrilled, and actually I have always felt like I would be a boy mom, since I was a teenager, and other than a few splurge items I want to buy for this baby, we are all set on clothes and boy baby stuff. Although we do have to buy a bigger car, i.e. minivan.... And I am getting a niece in October to spoil (and send home) too.

Naming him will be another story. We already had a girl name picked out but naming a third boy is HARD. We think we have settled on a first name, but its to be announced at a later date.

Besides that I have been feeling like crap. First trimester has kicked my booty. I nap almost every day and take a lot of baths. I went from eating completely vegan 4 months ago to eating only carbs. I finally could stomach veggies again this last week, so that's an improvement. I've been on medicine that causes weight gain... and have already gained some weight, but I am just so thankful that God has blessed us with this healthy baby that I'm not too worried about it. I've lost weight before, I'll lose it again. I haven't felt like working out and I am not drinking Shakeology right now, so I really feel like my world has been flipped upside down. And I have been telling Bryan I feel like I am living a double life doing my fitness business and keeping this a secret so I am SO glad that this secret is finally out so I can transition into fit pregnancy as I feel better and better going into second trimester! My due date is technically in February but since I had both of my boys at 35/36 weeks my doctor told me to plan on a January baby! We can't wait!

So that's the bulk of it. We are having another baby. A BOY baby. And my heart is so thankful. Thanks for all of the well wishes and congratulations! We couldn't be more excited.