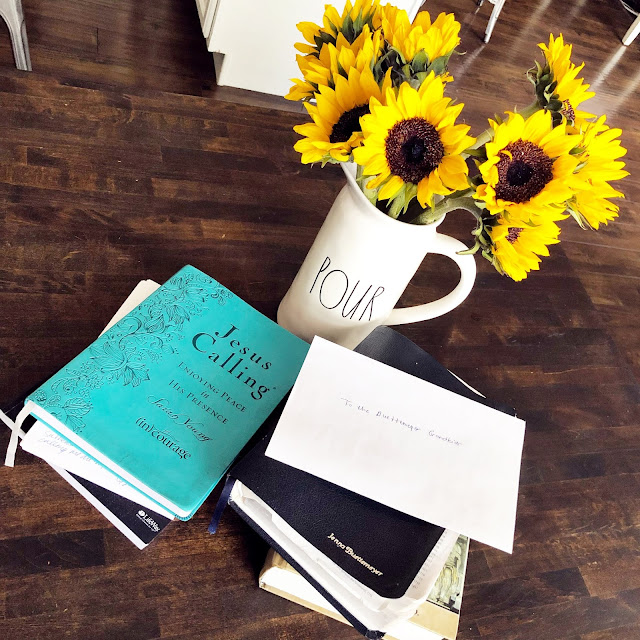 My goal has been to blog once a week. I've been asking God to give me a word to speak on, something each week to share... and this week, boy did He.

I've been going to Tuesday morning bible study for the past 18 months. I love it, it's like a mom escape because I grab Starbucks or Sonic on the way there and I can drop whatever kids I have that day off in childcare and I have two hours of girl time with some of my favorite, and some of the most encouraging, people. The Bible study that we did last fall, along with the work God was doing in me, completely changed my life. We are doing the Bible study Authentic by James MacDonald right now and so far it has been really good. This week we talked all about how to actually study the Bible, and then watched this week's video which was about prayer.

I've been blessed to know and look up to several prayer warriors in my life. My great grandma Joy is always the first that comes to mind. My mom is another. My mom's close friend and basically my second mom, Ms. Janice, is another. They are all people who I know if I ask them to pray, they will without a doubt. But another one that sticks out to me (and that I couldn't get off my mind on Tuesday during study) is my Mother-in-Law, Janet. Any time Bryan and I were concerned about something, asking for advice... no matter how big or how small, she'd always ask, "Have you prayed about it?" I remember her saying that about what I considered to be the silliest things, like finding my car keys or needing to change an appointment. No, of course, I hadn't prayed about that. Her wisdom still is fresh on my mind like it was yesterday, God cares about us in the littlest things just like He does in the big things.

I left Bible study really missing Janet. If she was still alive she would have been there with me. She would have been up there that Tuesday morning chatting with all the ladies and showing off pictures of her 5 grand babies. I can hear her and her southern accent talking to everyone (because she knew EVERYONE) in my mind as I type... but God chose to take her 5 years ago, so she isn't there.

During study on Tuesday we had talked about concordances and sentimental bibles that were special to us and I couldn't wait to get home to get my concordance out of the attic, that and well, my Bible. Bryan gave me a new Bible on our wedding day with my new name on it and wrote on the inside cover. It is a precious treasure to me... but several years ago it got stuck in a desk drawer and ripped in half. I'd looked into getting it fixed but never took the steps to actually do it. I then went several years without picking up a bible... and this last 18 months I've been using a pocket bible that fits in my purse, it's been fine, but it isn't MY Bible. So I got home... hopped up in the attic and quickly found both my concordance and Bible. I went back down and set them on the kitchen counter. I opened up my Bible and I completely lost my breath.

Inside the cover of my Bible was a letter that Janet had written to "The Buettemeyer Grandkids".

I'm still not sure if I ever knew this letter existed. Part of me has a vague memory of her writing some things right before she went into hospice. I didn't remember this letter specifically though. Bryan doesn't remember it. But regardless, it somehow made its way into the front of my bible, a bible that I probably hadn't picked up more than a handful of times in the last 5 years, and definitely not at all in the last 3-4 years.

Janet used to tell us about God Winks. It's from a book that she'd read. Basically it's similar to the concept of a coincidence but more along the lines of a sign from God. This was a major God wink. I got to read her words, in her handwriting. I was so encouraged. The whole letter is basically talking about how she knows the kids will be sad not to have known her, but how she is happy in Heaven because she lived her whole entire life for this. Be still my heart.

We haven't shown the boys yet. Hudson is definitely old enough to understand it. We will show them soon, but we wanted to keep the content of the letter private between them and G-Ma. And as I was sobbing and telling my mom that I'd found it, she made the amazing point that it was special that Janet didn't address it to just Hudson and Rhett. She didn't know anything about Sawyer, he wouldn't come for several more years... and whatever other Buettemeyer children there may be in the future... she addressed it to all of "The Buettemeyer Grandkids".

This was the second "God Wink" of my day on Tuesday. The first was winning the Bible study "raffle" door prize. In the 3 semesters I've gone, I haven't ever won, I am a pretty unlucky person by nature. But this Tuesday, I did, and it was a beautiful bouquet of Sunflowers, which are my favorite flower. I saw them as I dropped my name in the bucket and somehow I knew then they were meant to be mine... and they were.

Bryan and I are in a season of worldly chaos and complete turmoil. I have never felt more out of control of my future in my whole life than I do right now. My spirit, however, is resting easy because God has 100% gone before me, and I rest in that truth. We are dealing with legal proceedings, scary and unknown things, and definitely more difficult things than I thought I'd ever have to see in my life, let alone my early 30's. These things that I struggle to explain to my kids, things that can keep me lying awake in bed at night for hours... these are the big things, but God.

God has been showing me lately that in the little things, He is taking care of me. He gave me the sunflowers to brighten up my home and heart. He gave me Janet's letter so I could hear something special from her on a day I missed her so much. He's also showing me that He is working out the big things, I just can't see it yet or as easily as I did with the other things.

That's the message on my heart today. I got to hear straight from Heaven this week. I'm turning over the littlest things, knowing that sometimes the little things are what add up to be the big things.