Labels
Posted by Jenna Buettemeyer May 24, 2019

The Hardest Thing About 4 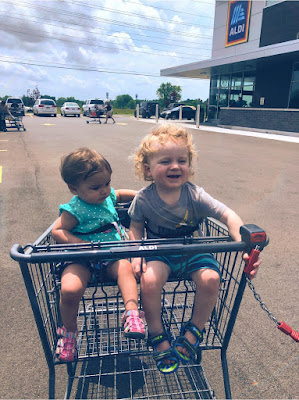 Here is something funny... When I dated Bryan in Jr High we had high hopes and dreams for ourselves.... and one of those things was having four kids. The first would be Brooklyn and then Carter.... and we'd live on a mountain. (Which we then proceeded to have THREE boys, and Bryan has a nephew named Carter... and we've never lived on a mountain... also I am not sure Bryan ever knew these plans... but I totally wrote them in my diary.)

So... we had Hudson, then we had Rhett... and almost stopped there. It took four years for us to feel like we could handle another kid. Then I had a miscarriage, and right after surprisingly got pregnant with Sawyer- ie 5 weeks pregnant on our All Inclusive Trip to the Bahamas.

Four kids was kind of out of the picture. I have horrible pregnancies and after the miscarriage my anxiety was high for a lot of my pregnancy with Sawyer... Bryan got the snip last July. No more babies for us.

Weirdly enough I had another what I think now must have been an early chemical pregnancy that we found out about 2 days after the snip-snip. I was terrified and under no circumstances knew how we could handle four kids. With so many weird maybe positive tests over a week or so, I ended up going for blood work that turned out to be negative.

I was okay, I hadn't let my mind REALLY go there... but it had KIND of went there... and what IF we did have another baby?

...And then the phone call came in October that a 3 month old baby girl needed a home. She's been our baby #4 for the last 7 months.

The hardest thing about having four kids... it's feeling like I can't be everywhere or do everything.

When Hudson was a baby I didn't take him ANYWHERE with me. And I laugh at myself now because I literally take our big bus of a double stroller with Sawyer and Remi with me EVERYwhere. I rarely am alone- until they both start MDO 2x a week this fall- holla, but that's another story for another day, Dr Appts, DMV, Dentist, School plays and school parties... they come along for the ride but it's true that with four kids I can't be everywhere at once.

Today Hudson and Rhett had their end of year parties. I had both babies, out during nap time, in the bus, of course, because containment is my FRIEND with a 10 mo old and 2 year old. I had to go back and forth between class rooms, with said bus. I just kept feeding Sawyer donuts. And the world didn't end. The babies did great, and the big boys were so happy I was there.  But I had to miss their Easter parties because the babies were sick, And I missed a few field trips this year. And the Mom Guilt hit hard...

I'm working through this with my counselor, and she's brilliant, but I often hear her voice in my head when I feel obligated (or bad about not being able) to do something, saying, "But what if you don't? What happens if you don't?'... and usually my answer is "nothing". I am the one putting pressure on myself.

Some have asked me if I feel like Hudson and Rhett get less attention now with the little two being so needy. And of course the answer is yes. BUT what Hudson and Rhett (and Sawyer eventually) ARE getting... is the experience of a lifetime. The boys will always know that we (our whole family) sacrificed a little to love A LOT- just like the Bible calls us to. If you asked them, neither of them would change a thing.

...And once again God has proven that even when I doubt myself and make my own plans, if it's His will, He won't let me get in the way. I am not going to stop His plan for me and for our family. And I am oh-so-thankful for that.